While at Broadside in Sittingbourne last year I got chatting to the group known as Postie's Rejects and was asked if I would like a game someday. Well, that day was yesterday. We had a Crimean War 15mm game to Postie's own rules where the British and French were defending a small town not far from the main supply port on the peninsula (the name escapes me at the moment) against the Russian Bear. I was given the left flank with the British, one Rifle Brigade and three others plus a battery of medium guns. Immediately opposite was Big Lee with eight Russian infantry battalions and a battery of guns. John was our CNC in the centre with Ray on the right. Opposite them were Ian, John and Smiffy.
The game started well as my infantry fairly barrelled along the road to protect the left of the village, while our centre and right prepared to fight off another Russian Brigade.
The long and the short of it was that the right centre was eventually overwhelmed by sheer weight of numbers although my flank was holding it's own after reducing the spearhead of the Lee's Russian attack down from eight battalions to three through various morale checks under fire etc., it was decided that the Allies would have to withdraw and leave the field to the Russians.
Postie's Shed o' War -which has the space for a 14' x 6' table with all the trimmings- was like a wargamer's Aladdin's Cave. I thought I had some lead but this bloke had got all of the main periods covered and then some in huge numbers -Postie said he has 30,000 15mm Napoleonic figures alone! I saw some of his other armies so I can well believe it.
I had a brilliant time and it was a perfect example of what wargaming should be like, good conversation, lots of good natured banter with a lot of like minded people all enjoying their hobby. Plus, I couldn't knock the in-house catering as supplied by Postie -doorstep sarnies of cheese and pickle with fruit cake to follow. Food of the Gods! Thanks again all for a great day. They even made me and Honoury Member of Postie's Rejects and I have a little 7YW Frech figure on a plinth as a trophy. I'll post a picture of him next time as the camera is upstairs.

Here are some pics of the day. 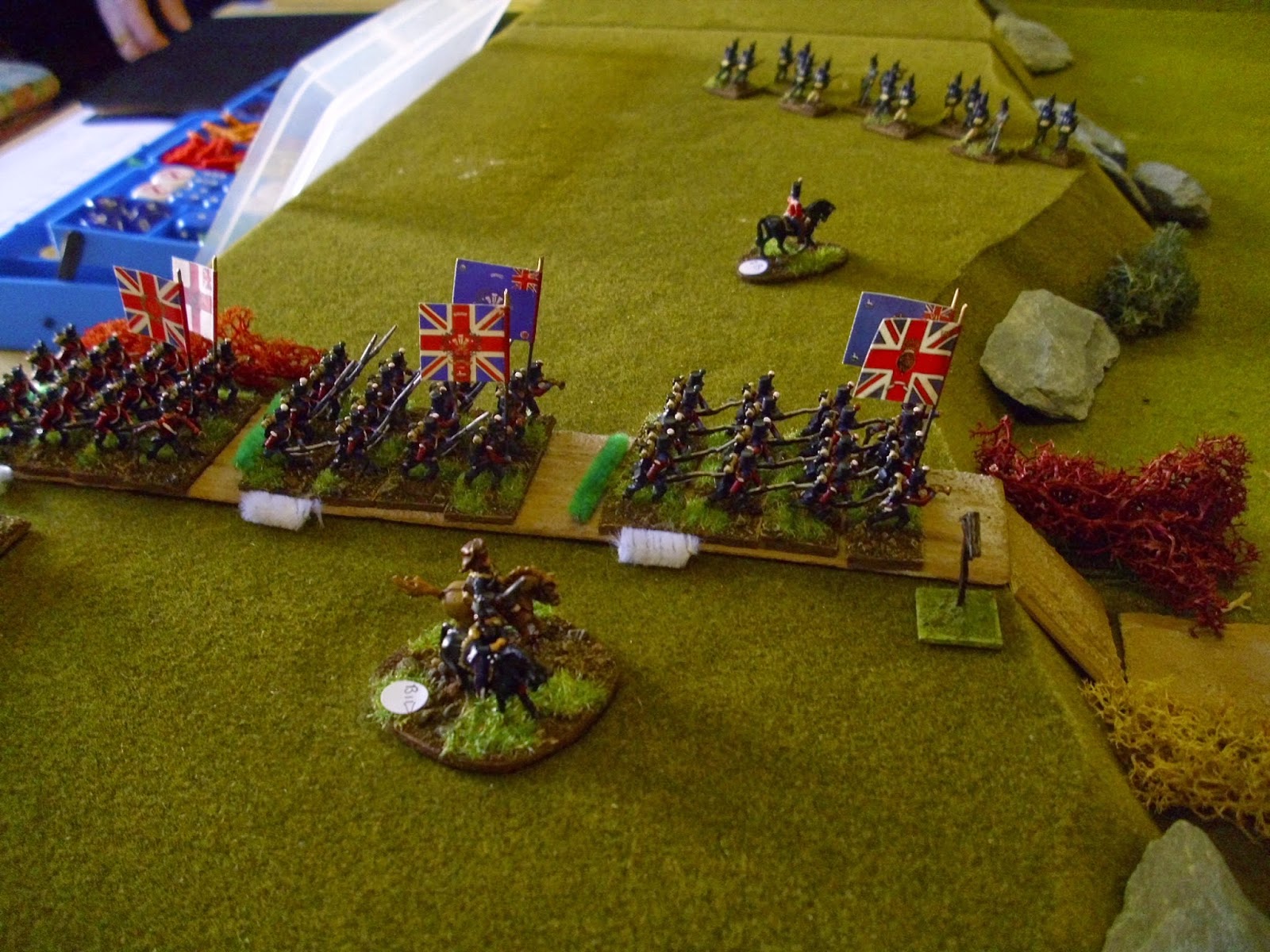 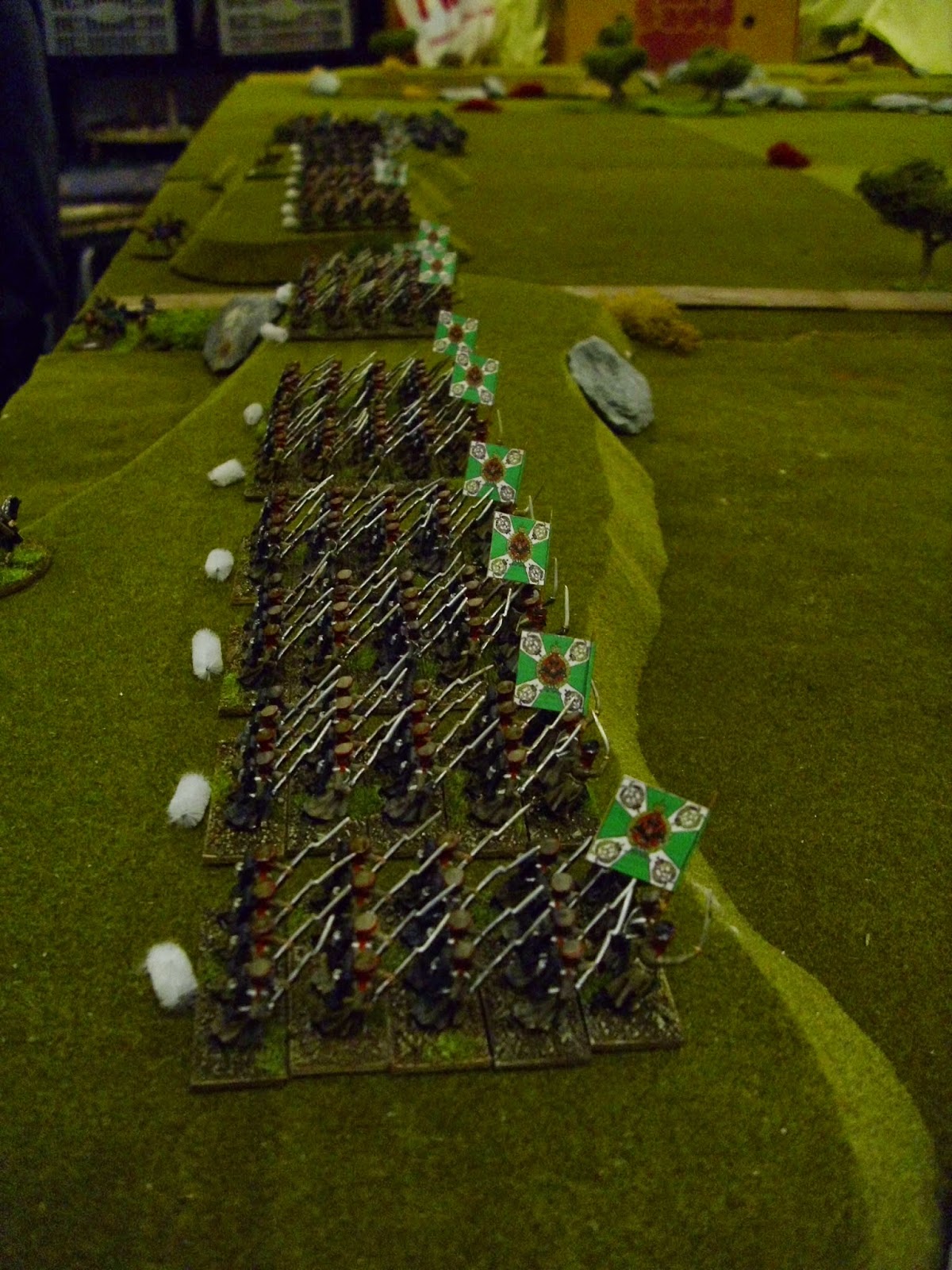 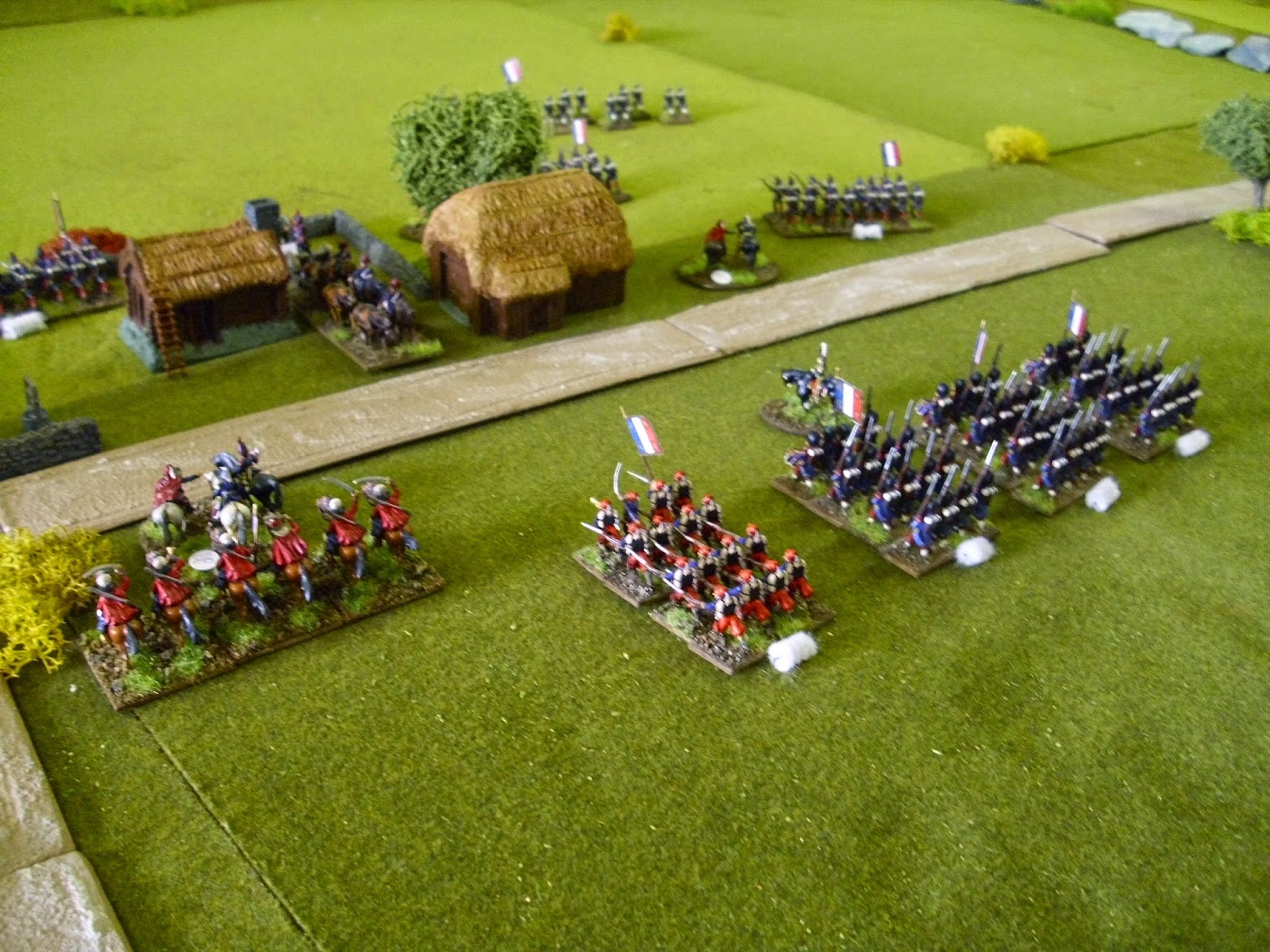 Our Centre and Right 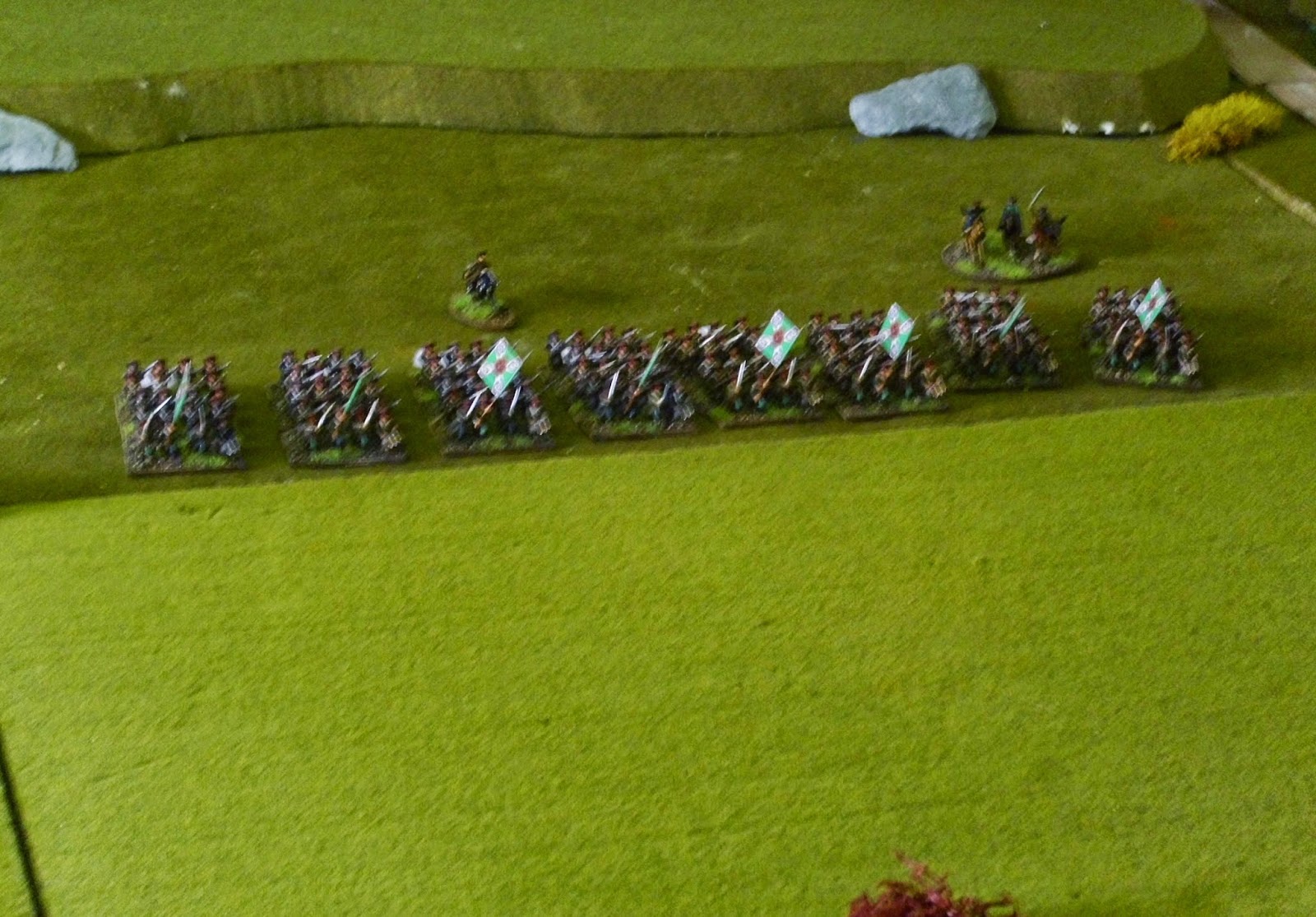 The Russian Bear ambles forward towards the village. 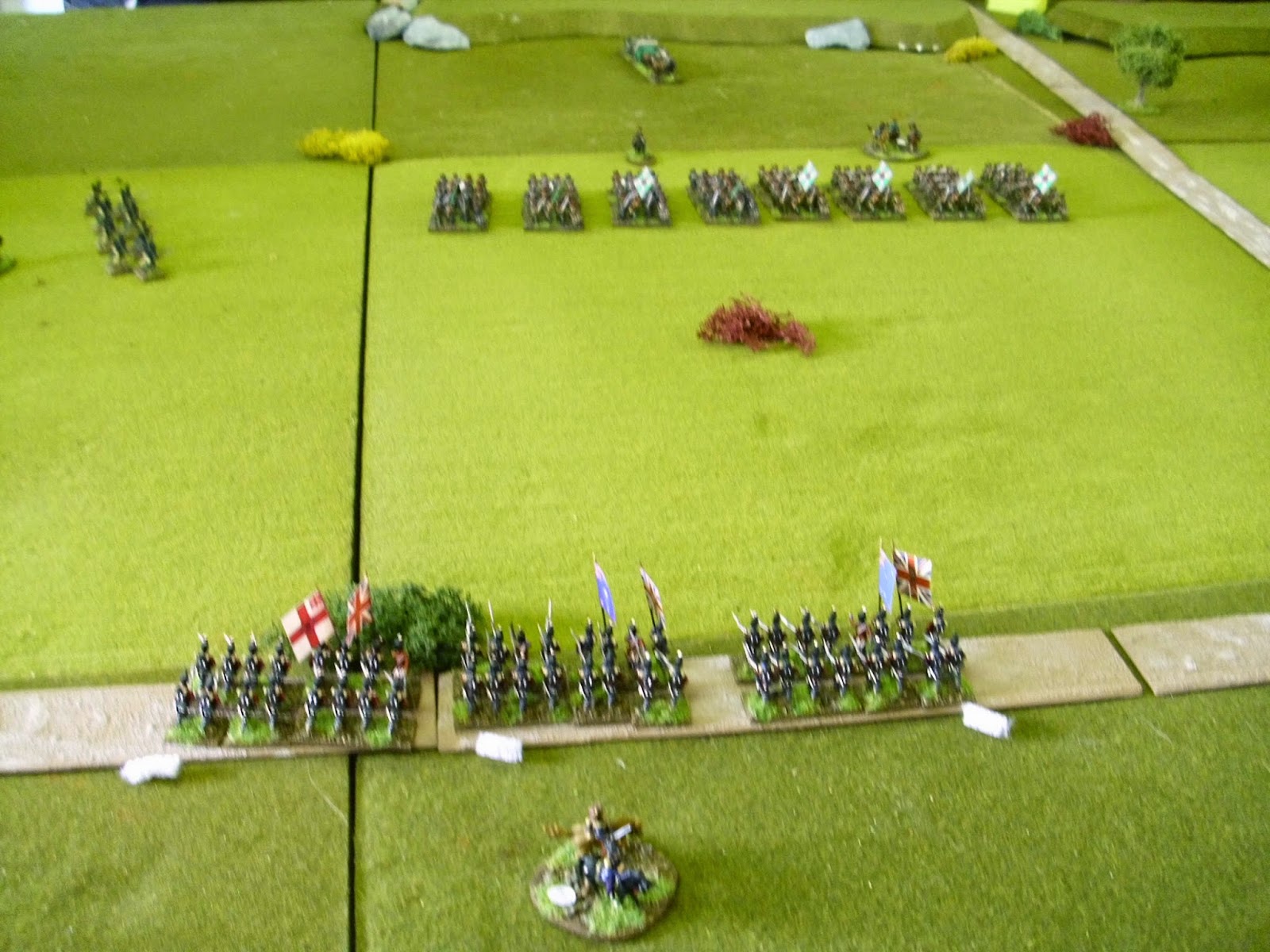 My Rifles and artillery slow down the battalion on the flank. That's one distracted, only the other seven to deal with now. 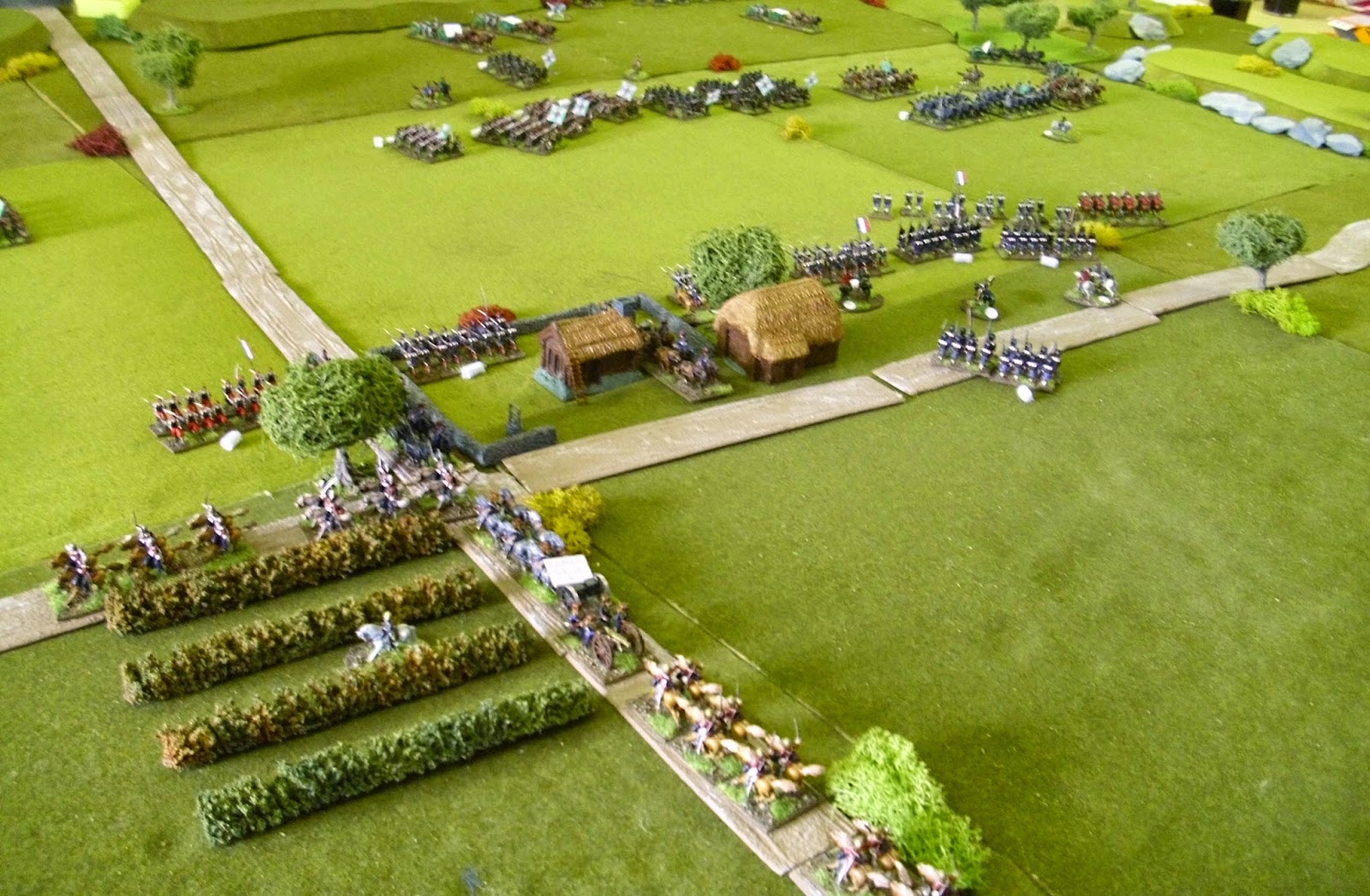 Our Centre looks a bit hairy with all that lot bearing down on them. 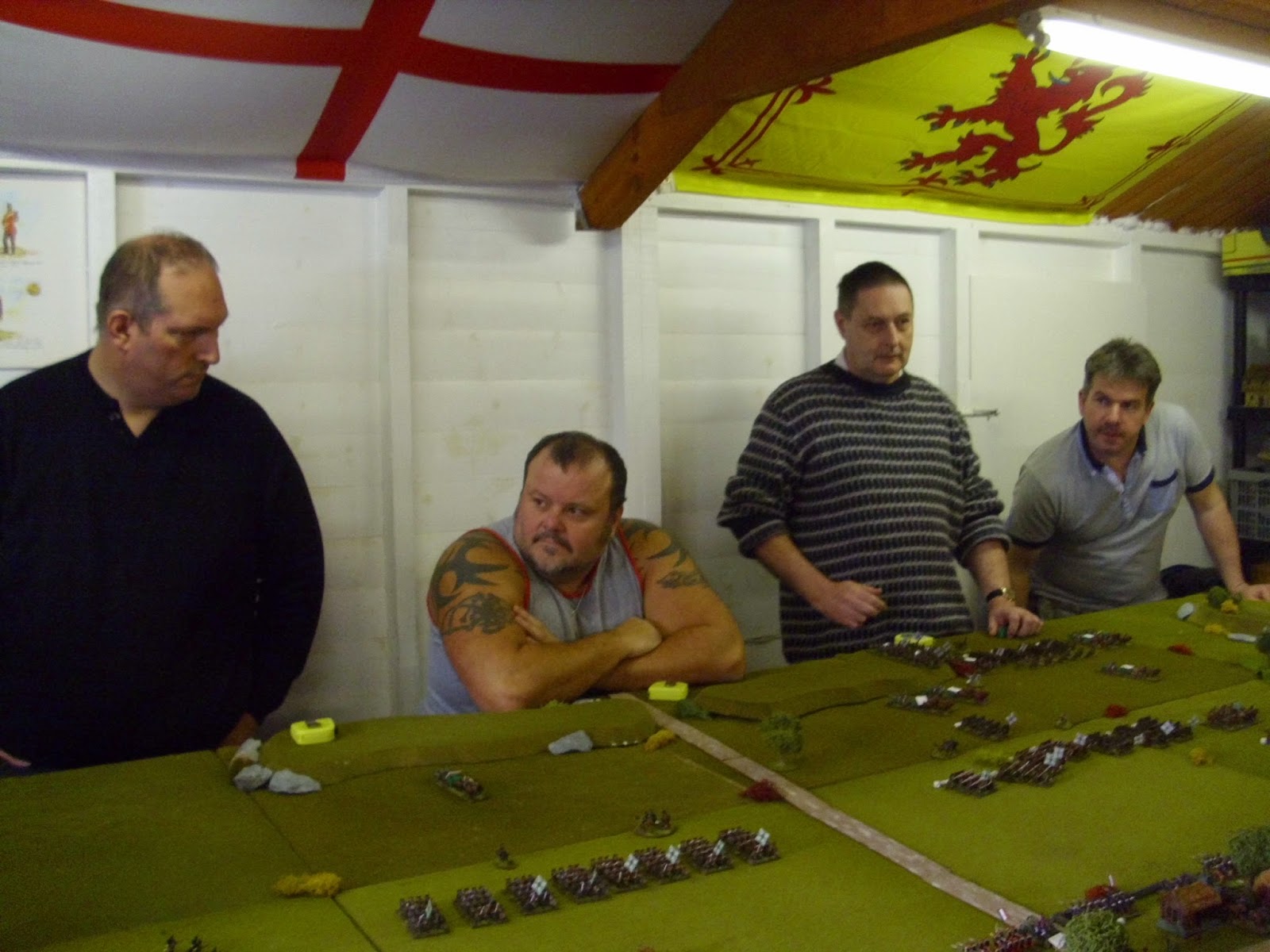 The Opposition l-r Lee, Ian, John and Smiffy. At this point in the game the Russians were not holding out much hope of success. How fortunes change. 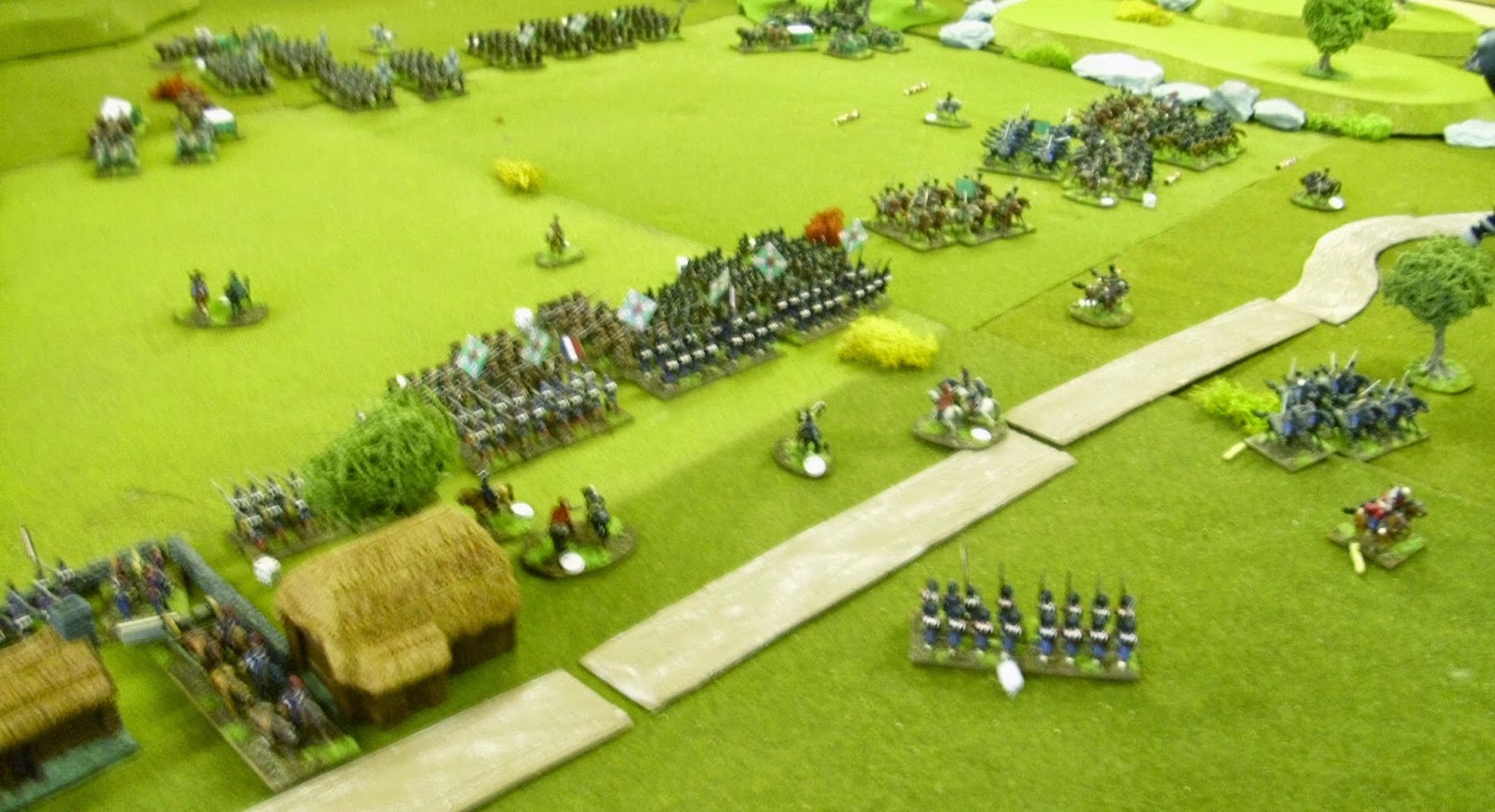 The Russians ride roughshod over the French in the centre. The Russian cavalry -who up until that point had been described as cr*p- suddenly found their battle mojo and made short work of the French cavalry on the far flank, two battalions of Imperial Guard were forced back as was the line unit just to the right of the building. With no stable right flank -and not much of a centre either- the French CNC had no option but to call for a withdrawal.

In case you were wondering, the small pieces of white craft pipe-cleaners are first fire markers.
Posted by Subedai at 14:30

Glad you enjoyed the game and the convivial atmosphere. Were a friendly bunch (mostly!) and at the end of the day, its all about the games.

Like Lee said, glad you had a great time and enjoyed the game. Its all about the banter really, if I can wind Ian and the opposition up, I've achieved my first plan, the second plan is to win, unfortunately that didn't happen this time...."We were Robbed" I hear you cry!!!
Its good to get a game in but its even better to meet up with al the like minded loonies!
And as you were a good boy on the day, I'm sure you'll be making a return visit soon???

Thanks both. I had a great time and would love a return visit, just let me know.

Enjoyed reading it and posted.

Subedai
MAIDSTONE, The Garden of England, United Kingdom
Apparently I'm a grumpy old man who spends too much time on the computer, reading, watching football -especially West Ham United- and painting 'toy' soldiers.(Pearls of Wisdom from the other half). P.S. Photo of moi was taken by the OH at El Jem, an incredibly atmospheric, ruined Roman amphitheatre in Tunisia.